Rutgers Recreation hosts over 50 intramural sports leagues throughout the year. Various levels of competition are offered in both team and individual/dual activities and opportunities exist for Men’s, Women’s or Co-Recreational play. With activities held on the Busch, College Avenue, Cook/Douglass and Livingston Campus, you can find the intramural sport that best fits your schedule.

TOP 10 THINGS YOU NEED TO KNOW ABOUT INTRAMURALS

1. They are a Rutgers tradition and everyone plays them!

2. No practice. No tryouts. Just play!

3. All skill levels are invited – beginners through seasoned players!

4. You form teams on your own (residence halls, friends, organizations, etc.) and we help find teams for free agents.

5. There are competitive and recreational leagues – men’s, women’s, coed and open.

6. Leagues exist on all campuses and you can play anywhere you choose, regardless of where you live!

7. You get to choose when your team can play on the season schedule.

8. We have all the equipment you need!

9. Your team entry fee helps subsidize the cost of hiring officials and running the league.

10. We are always recruiting interested officials and we train you.

HOW ARE THE LEAGUES ORGANIZED?

In most Intramural Sports leagues, there are different skill divisions. Although both leagues are competitive, the anticipated level of play is higher in an “A” division. Those looking to play a sport for the first time or looking to have more fun should register for the “B” division.   When there is only one skill division offered, playoff brackets may be set up to allow top teams from the regular season to compete for the “A” championship and second tier teams to compete for the “B” championship.

RATIOS FOR CO-ED LEAGUES
In coed divisions gender ratios apply for the amount of players participating. See the appropriate sport or event’s rules for detailed information. Here are the most common sports and ratios:

Open leagues offer men and women the opportunity to participate on the same team.  There are no requirements for the number of identified male or identified female participants that must be on the field/court at all times.

WHAT ARE THE TEAM CAPTAIN’S RESPONSIBILITIES?

Enter his/her team in the desired sport via imleagues.com before the announced closing date.
Team captain will need to have an account created on imleagues.com before the desired sport can be chosen.
Team captain will need to pay any associated team fee before team will be accepted on imleagues.com.
Represent or see that the team is represented at all mandatory league meetings.  At the initial captain’s meeting league organization is discussed and rules disseminated. Any team not represented by a team member at the mandatory captain’s meeting may be replaced by any team on the waiting list!
Study the rules of the game and educate team members regarding all policies, procedures and rules pertaining to Intramural participation and specific leagues.  All team members must also create accounts on imleagues.
Stimulate and promote participation and ensure all members of the team are eligible to play.
Assure that every team member has read and signed the disclaimer statement PRIOR to play.
Notify each team member of the date, time and field of each contest the team plays.
Keep his/her name, email address and telephone number up-to-date.
Check daily the intramural bulletin board in the respective recreation center and postings via IMleagues.com.
Make an effort to see that those representing his/her team play according to the rules of the game and conduct themselves as good sports.

YOU NEED AN ID TO PLAY – NO EXCEPTIONS!
All participants must bring their valid RU ID to play. Participants will not be permitted to play without a valid ID, which will be collected from all team members, and will be submitted to the Intramural Staff for verification and returned after the game or event.

Teams should arrive early and be ready to play 15 minutes before the start time.  If a team shows up 5 minutes after the start time it will be declared a forfeit.  To avoid a forfeit, be certain that your entire team is informed of its play schedule, and that it has the minimum number of players required to play present; It is a good idea to bring extra players!

ROSTER RULES
Teams may pick up players throughout the regular season provided they have not already played for another team within the league division (Men’s, Women’s, Coed).  Any added player will need to create an account on imleagues.com before their “next” scheduled contest.  Free Agents can also be obtained through imleagues.com.  To ensure playing time for all, we limit the number of players allowed on the roster.  Rosters will be compiled from regular season games and locked before playoffs. Participants must have played in a minimum of two games to be eligible for the playoffs.

WHAT EQUIPMENT IS NEEDED?
The department will provide all necessary equipment for a scheduled contest or event. Participants may choose to bring their own equipment, but the intramural staff reserves the right to determine what equipment may or may not be used during the contest or event.

If a team requests the use of an alternate piece of equipment for a game, both teams involved and the intramural supervisor will need to agree on the equipment before it may be used. If disagreement occurs, the Intramural Department’s equipment will be used.
For your safety and the safety of others:
•  Proper shoes are required (metal cleats are prohibited).
•  Any participant wearing eyeglasses or other eyewear may be required to wear a safety strap, especially if the eyewear is deemed unsafe during play.
•  Jewelry (rings, watches, necklaces, ankle bracelets, earrings, rubber bands, etc.) and casts are prohibited. Placing tape over jewelry will not be allowed.
•  Knee braces are allowed with the approved covers (neoprene protective covers).

SCHEDULING
For most leagues and tournaments, an Instant scheduling format is utilized unless otherwise noted. This allows teams to select their play days and times on imleagues.com. Games are expected to be played as scheduled.
Some uncontrollable situations necessitate the rescheduling of games by the Intramural Staff. Examples of such situations include, but are not limited to, weather, facility issues, or facility schedule changes. If games are postponed or cancelled, team captains will be notified via imleagues.com or phone. For the most recent information regarding cancellations due to inclement weather, call the respective campus intramural office.
PLEASE NOTE: Every attempt will be made to reschedule postponed games on the same day/time of week; however, this is subject to facility constraints, and is not guaranteed.
During playoffs, game dates and times vary.

LEAGUE STANDINGS
To determine standings, teams will be awarded points based on the outcomes of their games. The format will be as follows:

If a team forfeits two games, they will be dropped from further competition in that sport.

The following order will be used to break a tie within the standings:

PLAYOFFS
The regular season of all leagues will be followed by a single elimination playoff tournament.   Playoff games will not be rescheduled. Playoff schedules may be revised if inclement weather limits playoff time.  The number of teams advancing to the playoffs will be determined by the amount of teams registered for regular season play. Generally, the top two teams from each division advance to the playoffs, with the possibility of some at-large bids, pending the final standings. The Intramural Director reserves the right to modify the playoff schedule, given time and field constraints.  To be eligible for the playoffs, a player must have participated in a minimum of 1 game during the regular season.  Playoff schedules are posted on imleagues.com and in the respective facility the day after the last regular season game is played for that division. The schedules are also available in the respective Intramural Office. 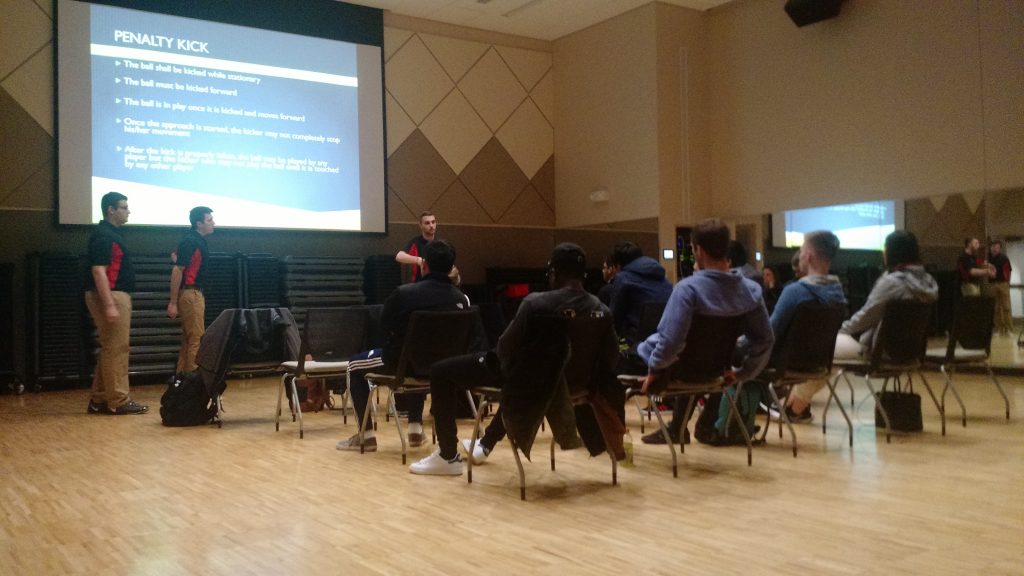 The Rutgers Intramural Sports program is a leader nationally in intramural sports officiating. All intramural team sports are officiated by Rutgers University students. Our peak hiring times are September, January and late March. Potential new officials are expected to attend up to 6 hours of training (A, B & C Clinics) that will cover procedures, sport rules, mechanics and scrimmages.

Working as an Intramural Official provides an opportunity to meet new friends, develop leadership skills, and become involved in the campus community. Previous officiating experience is not necessary however we look for candidates who have played competitive sports and/or specifically played previously in the intramural program. Work schedules are flexible and you can officiate and still play in the program.  Officials start at $11.00 per hour.

If you are interested in applying to become a potential Intramural Sports Official, please click here so that we can screen your credentials and invite you to the clinics if we feel you are qualified.

If you have any questions, please contact the Coordinator of Intramural Sports,  Paul Goobic

As we are always looking for students that love sports to get involved, to be considered for any openings after the pre-season clinics have passed, email us at intramurals@echo.rutgers.edu

Click here for more information in our Referee’s Corner.

HOW TO GET ON THE UNIVERSITY PAYROLL.

If hired, you are not allowed to work without being on university payroll. There are one of 3 document combinations you will need. Either: 1. Passport  2. Drivers License AND the ORIGINAL (No photocopies will be accepted!) copy of your Social Security Card or 3. Drivers License and ORIGINAL copy of your Birth Certificate.

Are you interested in being a referee? Please click the resource links below to help get you started. (You will be taken to a Google Drive). 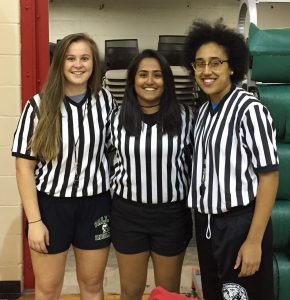 Hail to the IM Champs!